A Physical Pole Shift is a process when the entire planet 'flips' 180 degrees, contrary to a Magnetic Pole Shift, where only the magnetic poles reverses polarity. Science has established several Pole Shifts occurring on the Earth. But what really expired is unclear and the process confusing. Let me establish my view on this process and what might be happening in a larger perspective.

Why must Pole Shifts occur in the first place? My view on this is that our Sun orbits around another star, a star that collapsed and turned into a 'Neutron star'. This type of star is modest in size but has established a powerful magnetic field. Particles with a positive charge (protons) has merged with electrons to form neutral particles (neutrons). Every single neutron is like a small magnet and when they all join together, the result is one giant super magnetic body, a ‘Neutron star’.

A Neutron star with a highly elongated orbit will behave somewhat odd. When positioned farthest from our Sun, it is forced to overbalance, tip over. Two things has then occurred; the magnetic polarity is changed and the direction of rotation is reversed. When the Neutron star returns to the Sun, things will change. The Sun’s magnetic field is affected but this happens anyway due to the 11 year cycle of the Sun. This doesn’t change the magnetic properties of Earth one bit. But every planet with a magnetic field will be influenced by the Neutron star; they will reverse their magnetic fields.

Let’s imagine how Earth is affected with a Neutron star getting closer, a star with a reversed magnetic field and a ‘uniform’ rotation (in a stable situation, Earth should have a rotation opposite that of the Neutron star). A course of event with four differens stages will unfold. Using images, we will try to illustrate exactly what will take place concerning planet Earth. 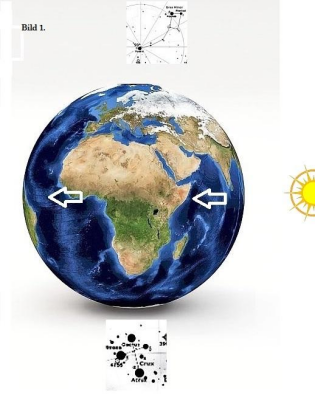 Looking at image 1 above, we see the present circumstances of planet Earth. The planet is rotating from East to West and the Sun is consequently rising in the East (see image arrows). At the North Pole we see a symbolic image of the Northern Starry Sky, depicting the Pole Star and the constellation Ursa Minor, The Little Bear. At the South Pole we see the predominant constellation; Cygnus, The Swan. 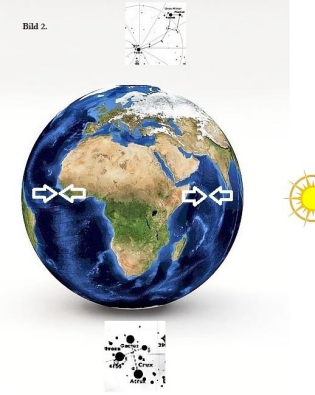 In image 2, the effects of the approaching Neutron star is starting to show up. Thus, the rotation of the Earth has slowly reduced to a standstill, symbolized by the arrows now facing each other. The Earth is now in effect instabile, and is beginning to ‘wobble’, i.e. the Earth Axis is moving out of control. 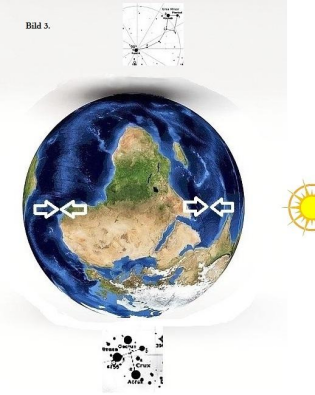 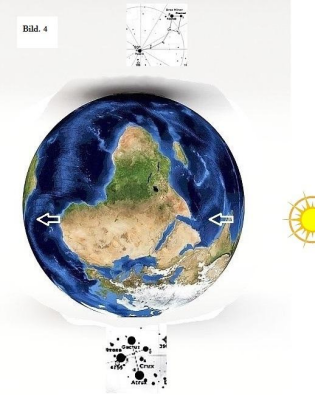 In image 4, the rotation is active again, now opposite what it used to be and also opposite the actual rotation of the Neutron star. Thus, the Pole Shift has been accomplished but the situation is in a complete chaos: What is up and what is down? What happened to the Starry Sky and the rotation of the Earth? In order to see this, we need to have a closer look at the actual perspective for the population of Earth. 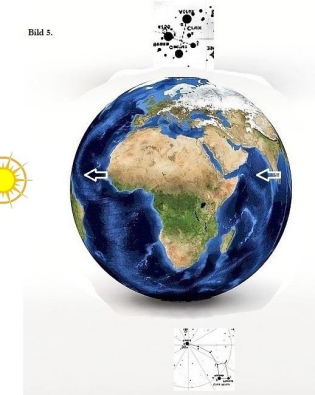 Image 5 is showing how the people themselves are perceiving their surrounding World after the Pole Shift. The Earth has a rotation as before but the direction is reversed and the Sun is now seen to rise in the West! The Starry Sky that used to be is no more; North has become South and South has become North. Confusion; the stars are no longer good for navigation, as one used to perform it!

The ‘Houses’ of the Zodiac are twelve and the ‘Stages’ of the Neutron star are twelve. That is, the astrological house of the Zodiac changes by 30 degrees at every (other) passage of the Neutron star. Approximately 6 degrees dislocation of the Zodiac when the star approaches from below the Ecliptic and passes the Sun. The additional 24 degrees are dislocated when the star arrives from above the Ecliptic, swings around the Sun and progresses down its longer orbit. All adding up to 30 degrees x 12 with the ‘turnaround time’ of 3661 years per complete circuit.

PS. Not to worry. The Pole Shift is not expected to happen until sometime around 2082 AD.

JRSN
I have read and studied popular physics, parapsychology and intuition my entire grown life. I set out to establish an all-encompassing theory about the Universe, and this I did. I do not hold any official Astronomer qualifications!

The Nibiru/Nemesis topic is stuck in preconcieved notions about the movement of ordinary stars and planetary bodies. The Brown Dwarf conception appears to be a theoretical construct rather that actual fact. When will we be able to comprehend the mysterious star and its host of companions?