Information coming from amateur astronomers and independent investigators seem to point in the direction of Nemesis being a Pulsar, a type of Neutron star beaming out light at the magnetic poles. The nature of the pulses are of an extremely low frequency (~1 rev/min) suggesting in this case that the star is very old. Naturally, the rotational speed of a newly formed Neutron star is much higher than that of a "Senior Neutron star". Nemesis is likely a "periodic pulsar", meaning it is dormant for the most part, only being active when in the close proximity of our Sun.

At the Aphelion point in the binary system of Nemesis and Sol, Nemesis performs a strange turn. One would expect the Spin Axis of the star to be at a 90 degree angle compared to its orbit, this is not the case with Nemesis. Nemesis orbit appears to be tilted some 60 degrees in comparison with the Solar Ecliptic but since Nemesis has a another tilt, this time relative to its own orbit, the angle of inclination will settle at 30 degrees. This will bring the Spin Axis of Nemesis generally pointing in a North-South direction, in relation to the Solar Ecliptic. (Not taking the Precession of the Equinoxes into account).


When Nemesis reaches the Aphelion point, the rate and direction of spin will stay exactly the same, but the Spin Axis will slowly start to turn and perform a 180 degree roll; magnetic north will turn south and vice versa. This is the crux of the matter when it comes to Nemesis destructive potential. 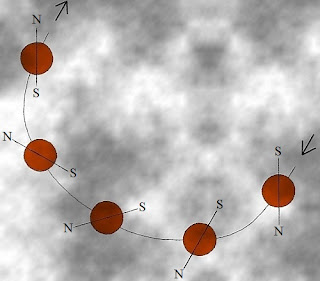 In the image above, we see Nemesis entering at the right side. It is tilted 30 degrees in comparison to its own orbit, the Spin Axis at this stage pointing directly towards the Ecliptic plane. Now the star begins to turn, tipping the Axis to compensate the directional change. At the end of the Aphelion, Nemesis has completed its roll but now the North Axis is pointing in the direction of the Ecliptic. The spin direction remained the same all the time but since the entire star is now upside down, the spin will appear to have reversed when Nemesis re-encounters the Solar System planets. And since the magnetic poles correspond to the general direction of the Spin Axis, a magnetic Pole reversal has taken place as well. Our binary system is quite frankly not a stable environment.

The situation when Nemesis rises above the Ecliptic, reaching its Perihelion point, is quite different. Here, the star just gently halts in its movement. No tipping of the Spin Axis occurs, and thus, the magnetic poles remain unaltered. (Again, not taking the factor concerning the Precession of the Equinoxes into account, which alters the orbit of Nemesis and thereby the angle of the Spin Axis). 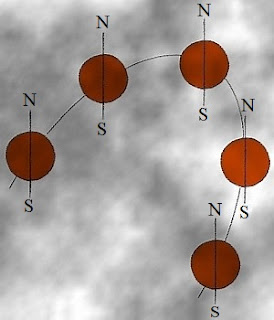 The situation is just as if you had a ball, tossing it into the air and filming it in slow motion. The ball would move up, halting for a while in its highest position, then falling down again. Thus it is like with Nemesis; the star reaches the peak in its orbit, standing as Hyperborea, the Night star of the North. Then begins the journey down, past the Sun and into the deep Abyss, below the Ecliptic. The plasma cord it had developed towards the Sun breaks. The pulsing light from the magnetic pole areas withers and flicker out. But you never know, there are rumors about the dark Sun at one time regaining its luminosity. Can a dark Sun flare up to light again; that would be a wondrous event!

Email ThisBlogThis!Share to TwitterShare to FacebookShare to Pinterest
Labels: Nemesis/Nibiru

JRSN
I have read and studied popular physics, parapsychology and intuition my entire grown life. I set out to establish an all-encompassing theory about the Universe, and this I did. I do not hold any official Astronomer qualifications!

The Nibiru/Nemesis topic is stuck in preconcieved notions about the movement of ordinary stars and planetary bodies. The Brown Dwarf conception appears to be a theoretical construct rather that actual fact. When will we be able to comprehend the mysterious star and its host of companions?